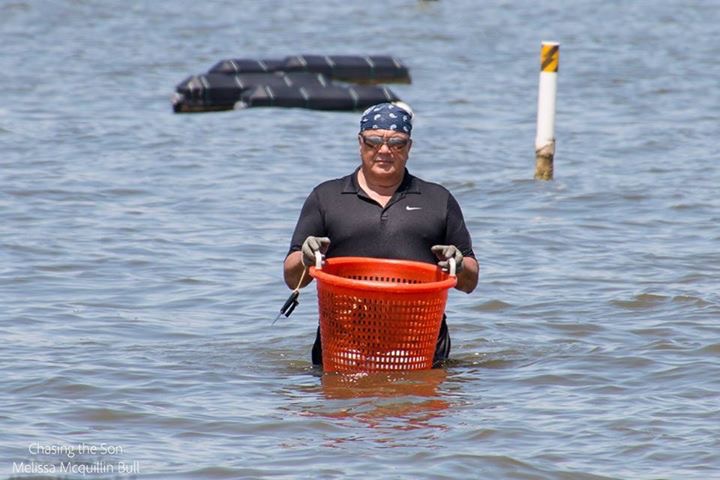 Navy Cove Oysters LLC was founded in 2011; it was born out of a long-term friendship and working relationship between marine science researchers Dr. John Supan and Dr. Charles Wilson. Eric Bradley, raised on a crawfish farm in south Louisiana, joined the partnership in 2016.  The partners sought to join a growing movement along the coastal regions of the Southern US and Gulf of Mexico to produce boutique, prized oysters for the half-shell market.

Our farm is located along the northern shore of Fort Morgan, Alabama near the body of water called Navy Cove, which was frequented by Indians, an anchorage for pirates, and then the U.S. Navy during the War of 1812 and WWII. The site rests at the intersection of the productive waters of Mobile Bay and the salty waters of the Gulf of Mexico.

Navy Cove Oysters are constantly bathed by tidal exchanges between the gulf and bay.

Navy Cove Oysters are characterized by an umami of moderate brine, a rich, creamy, buttery texture and sweet, cucumber-like finish. Our oysters carry the signature of a prominent “racing stripe” across the shell surface. They are easy to shuck with a bill or hinge oyster knife.

We target production of a medium-size oyster of moderate salinity. Smaller and larger sizes and higher or lower salt content are available. Oysters can be ordered through Bon Secour Fisheries in Bon Secour, Alabama and are offered on the half-shell and through the retail market at Sassy Bass Bar & Grill at Fort Morgan, Alabama.  If you have any comments or questions, please free to email us at Navycoveoysters@gmail.com.  You can follow/friend us at Facebook@Navycoveoysters and share your thoughts at Instatgram@navycoveoysters and Twitter@navycoveoysters.

Recently featured in Page and Palette.